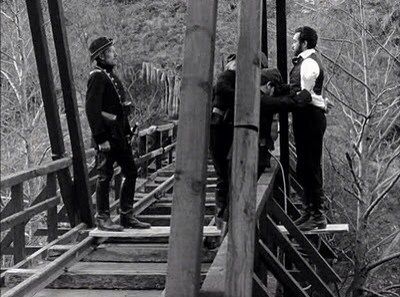 I. “An Occurrence at Owl Creek Bridge” by Ambrose Bierce

Bierce is clever. We are given a scene of a man, a Confederate sympathizer during the Civil War, about to be hanged for attempting to sabotage a crucial bridge for Union advancement. We flashback to his deeds, his farm and family, his actions leading up to his sentence. Then as he is dropped from the very bridge he’s failed to destroy, the line breaks.

We follow this man, Farquhar, as he plunges into the water, struggles with himself as to whether he ought to let himself drown, until his body decides for him and rips itself free from its bonds. He emerges to the river’s surface, bullets whizzing by, and cannons being fired. By some miracle, Farquhar reaches the shore, runs through the wilderness, and eventually ends up at his home (in a Gladiator type, dreamy afterlife sequence), where he rushes towards his wife.

Before he reaches her he feels a horrible pain in his neck. Everything flashes for an instant, then goes black. Farquhar is dead, hanged for his traitorous deeds. A great turn of events and an even greater trick on the reader.

II. “Man from the South” by Roald Dahl

This is a wonderful story with all the dark humor and ingenuity we can expect from Dahl. The characters are colorful and exaggerated, painted upon a backdrop of simple yet vivid imagery. There is absolutely nothing out of the ordinary or supernatural yet everything feels a bit fantastic. And the motives driving each and every action are quite human and, all the same, disturbed and perverse.

We begin by following our narrarator, who’s on vacation in the Caribbean, to the pool, where he sits back and watches some American Navy boys play with a group of girls. Soon after a strange man wearing a white suit and matching hat, decked out in all sorts of fancy jewelry, makes his way over. One of the Naval boys accompanied by a girl, our narrator, and this man, who we come to find out is named Carlos, strike up conversation. The boy brags that his lighter never fails. Carlos offers him a bet: light it successfully ten times in a row, he’s got himself a beautiful new green Cadillac, miss once, lose his pinky finger (which Carlos reassures him he’d never use anyway).

After some hesitation and debate, the group makes their way to Carlos’ hotel room, with our narrator as the judge in the bet. The suspense is extreme, we are on the edge of our seats as the boy strikes once, twice, all the way up to eight times. Carlos is standing ready, excited with a cleaver in hand, anticipating the moment he will bring his hand down on the table. It is predictable the reader might think. The boy is bound to miss on the last stroke.

This however is where Dahl throws a wrench in the system. The hotel door swings open and there stands a woman screaming at Carlos, apologizing for his mental illness. He’s won forty-some fingers this way, lost eleven cars, and was forced to flee his homeland in South America. What’s more he has nothing left to bet, she tells us, for he lost it all to her. At last our narrator glimpses her hand, a nub now, with only a finger and thumb remaining.

What remains is a not so typical sell your soul to the devil kind of story. This is that ancient tale retold with wit and sarcasm. The man from the south wants but a little thing for your greed fulfilled, yet in the end his evil work undoes him and he is foiled by his own wickedness. I laughed and laughed, was terrified, and laughed. Dahl is simply masterful.

III. “A Sound of Thunder” by Ray Bradbury

Bradbury has a lot of good ideas, only he often does not write them well. This is no different. It is the story of a grand safari sometime in the near future. A time machine has been built and the company in possession of it offers customers with hefty wallets the chance to kill a tyrannosaurus rex (who would have died only minutes after the expedition anyway). Government regulations, of course (and ‘yeah, right’ all the same), dictate that a special path be used so that no butterfly effect, the paradox that if something is changed it could ruin all time, occurs.

So while waiting for the expedition to begin the main character, Eckels, is talking to the other members of the party about the recent presidential elections. Keith defeated the more totalitarian-minded Deutscher to nobody’s suprise. Soon the expedition begins, they travel back to the specified time, and look for the creature to be hunted.

When the t-rex appears Eckels is spooked and leaves the path. The guides yell and scream and pull and tug and at last everyone is in the time machine on their way back. When they return to the present however things are a bit off. Eckels probes a clerk for information and finds that it is now Deutscher who has won the election. He looks to the bottom of his shoe where there is a crushed butterfly. Eckels begs his guide to take him back to set things right, but in response there is only a gunshot. He is shot dead on the spot.

Despite being a good idea, “A Sound of Thunder” falls short from being anything spectacular. An overuse of scientific terms and failed attempts to be poetic makes for slow reading. And Bradbury’s characters in this story come off as exaggerated to the point of comic, yet he seems to be desperately trying to set a serious tone and build a realistic world. I simply had a hard time suspending my disbelief and taking his deeper philosophical musings seriously. Perhaps first person, as it does in so many short stories, would have made this one a bit more effective.