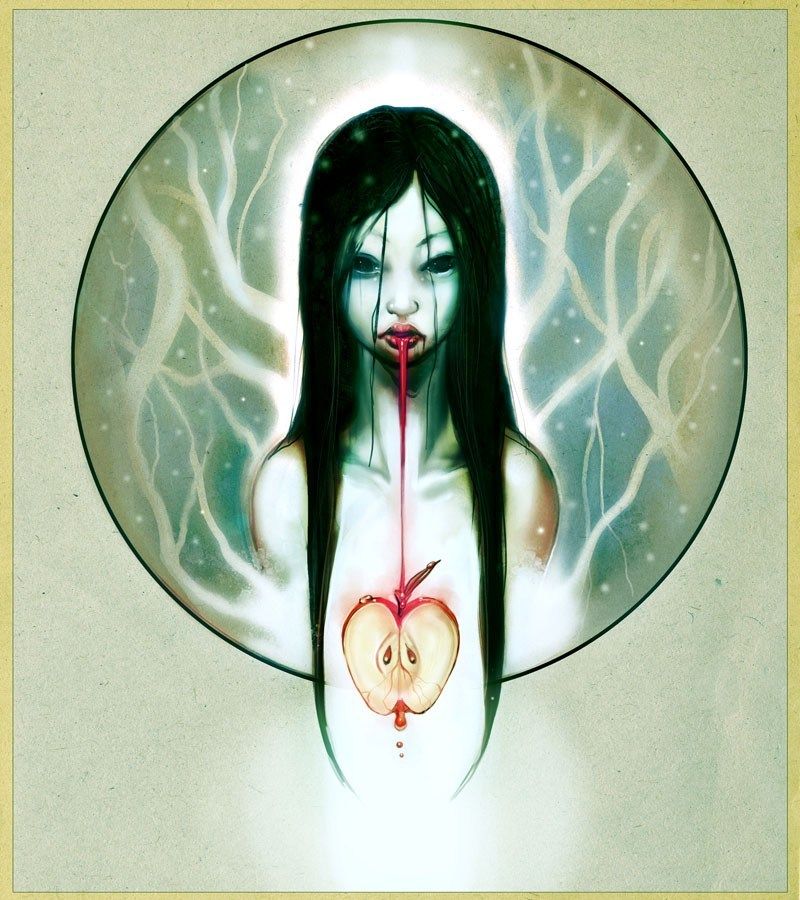 “I’m deeply interested in the evolution of the tales. What happens to a Grimm tale when it migrates to the U.S.?” — Maria Tatar on Krista Tippett’s NPR show On Being.

Me too. And they remained largely intact until Walt Disney came along and purified them. But as Tatar points out, thanks to popular entertainment they’re being plunged into the subconscious abyss once more and confronting our true demons. Back in 1994 Gaiman wrote this short piece and, wow, is it good. Disturbing. But good. Gaiman has a unique perspective on Grimm’s tales (and folklore in general; we only have to look so far as American Gods and Sandman to make this point). He was born in Britain, where the original tales are much more alive than they are here, and then moved to the U.S. in something like 1992. I think he may have been in large part the reason these tales were rekindled.

This is the tale of Snow White from the Queen’s perspective. Gaiman has transformed the girl we all love into a vampiric creature who fulfills men’s pedophilic desires while getting her blood-fill. And the dwarves have been transformed into mutants of a sort, wildmen and woods-dwellers living on the fringe of society. I won’t say much more about the work itself because I think you ought to go and read it for yourself. Be prepared though. Wait for your food to digest before jumping in.

What I’d really like to focus on is how Gaiman forged a new genre, fan-fiction I suppose, but a sort that is smart, thoughtful, and turns the originals (un)comfortably on their heads. He’s played with Cthulu, with Susan from Chronicles of Narnia, Humpty Dumpty and other nursery rhymes (in a Film Noir style), and so many others. He is a pioneer on this front. And he’s always pushing the boundaries, placing his readers in the most uncomfortable place possible, expanding territory, but all in good spirit. He certainly has a hold on the purpose of mythology. All his works are cathartic, forcing us to question the fabric of reality. This one perhaps most successfully. It’s certainly a fun read if not anything else.

II. “The Shoulders of Giants” by Robert J. Sawyer

Sawyer is a conceptual writer, but not much of a storyteller. His ideas are interesting, maybe, but fall flat in narrative form.

“On the Shoulders of Giants” begins with Toby, one of forty-eight explorers, awakes from his cryogenic sleep. The space ship he and the others are traveling on is making its way to Tau Centi, a solar system where an earthlike planet has been identified. The earth, when they left two thousand years ago, was in turmoil and the future of humanity was at stake. So this team went out in search of a new colony, as metaphoric Adam and Eve figures.

Sounds good so far right? Well, Toby is traveling with his wife on board. But she does not wake. The only other person who does indeed wake is Ling, Toby’s co-pilot, a woman he describes as beautiful, but without a partner on board. But the tension goes no further. There is no affair, not even an inkling of one. Missed opportunity number one for Sawyer.

Anyway, they’re approaching the planet when they see lights on its surface. There is already intelligent life living here. When they set out none was detected, but it only took humans a couple years to develop electronics and radios and so on, and so it would be just as easy for some primitive beings to have grown up in the span of a few thousand years. Now its getting interesting. What the hell will they encounter? How will they be received.

Then here comes Sawyer, with a big prick in his hand to deflate your balloon. Nope. Just humans here. Friends who still speak a form of English. “We wanna throw you a parade!” their spokesman says. Hm. This guys a little strange we begin to think. What’s up his sleeve? Well, don’t get your hopes up. He really wants to throw Toby and Ling and the rest of the crew a party and let them live their lives as kings. He explains that shortly after they left, the conflict on Earth died down, they developed new tech, and made their way here lightspeed! Without the developments Toby and Ling’s crew made, this mans ancestors could have never made it so far so fast.

So Toby and Ling stay for a bit and decide what to do. They ask for another ship, a faster one. They’re heading to Andromeda this time! But before they go the spokesmen runs up and asks to come. He’s fallen in love with Ling (what?!). And off they go, probably to be beaten there by even more advanced technology once again. I felt I wasted precious, precious time reading this story.

Now to turn to a true giant in sci-fi. Best known for The Time Machine and War of the Worlds, Wells takes a slightly different approach to the genre in this short story. Though his better known stories certainly have an anthropological focus to them, they also rely heavily on advanced technology as plot centerpieces. “The Country of the Blind” however is refreshing in that it entirely focuses on this human element, and not through strange species, but through human beings who are only slightly different than the ones we’re familiar with.

An explorer is hiking an uncharted region in Ecuador when he is swept away by faulty footing. He ends up in a valley where a group of people had settled long ago. And they have thrived despite their inherent blindness, set into their genes by a disease which overtook their ancestors. They have adapted their village and work habits to fit those without sight. Nuñez however sees an opportunity. He recalls the maxim, “In the country of the blind, the man with one eye is king.” And so he begins to plan to outwit and overtake this unsuspecting folk.

There’s a problem though. As Nuñez attempts to teach them, explaining the sense of sight he has, they do not understand him. They go so far as to thinking he is mentally challenged. At last, seeing no way out, Nuñez submits to their lifestyle and is given to live and work with a man named Yacob. Nuñez finds that he simply does not fit in. These people work at nighttime in the fields so that they are not burdened with the heat. The villagers again comment on Nuñez’s deficiencies. He fumbles around in the darkness and cannot complete what they think of as simple tasks.

Nuñez gets better, but is still laughed at by many of the villagers. Eventually he falls in love with Yacob’s daughter, Medina. This is yet another whipping point for the others, for they judge beauty with their sense of touch, and this girl is not seen to be attractive at all. But Nuñez doesn’t mind, because to his sight she is gorgeous. He attempts to explain what sight is to her, and though she is infatuated with the beauties Nuñez describes, she chocks it up to a fanciful imagination. Nonetheless she too loves him. Yet when he asks for her hand in marriage, the village counsel turns him down. They offer him a stipulation instead: cut out your eyes, the organ that is diseasing your brain, and your wish shall be granted. Initially Nuñez agrees, for his love is strong, yet on the day before his surgery, just as the villagers are falling asleep at sunrise, Nuñez chickens out and heads for the mountains. In the end, and an unnecessary ending this seems, he is crushed by an avalanche while scaling the mountain with encases the valley. It would’ve been just as effective with him simply leaving.

Now, Wells writes conceptually too. But unlike Sawyer, he wraps it up in a story that could stand alone, outside of the idea. And the musings behind the story speak to so many different areas. To begin, this is a clever riff off of Plato’s allegory of the cave. Nuñez has seen the light and he’s returned to a world of darkness where he attempts to educate the people. Yet they simply laugh at and scorn him. They’re little world, covered completely by rock and darkness, is the only one that exists. Nuñez’s fancies of a grand terrain outside of it is akin to a kingdom of heaven for an atheist.

This bit asks us readers to question our own perception. Can we truly know that this is it? That these sense of ours are trustworthy? Might something lie outside of the material world, or even within it that we simply can’t see? And for the village of the blind, the things they believed in truly did exist, if only inside their mind. What does this say about the power of belief itself? Might something be a truth in some vague form simply because people do believe in it? We see in our own world how this power can affect war and peace and so many other things.

Beyond that, how does perception affect language? The villagers speak Spanish, that’s for sure, but Nuñez notes subtle deviations from the Spanish he knows. They cannot express sight and so they speak in other terms. I’m a sucker for anything to do with linguistics and so, even though this was a small part of the story, it struck me as important. It is also interesting to note the double-sided judgments of Nuñez and the village. Nuñez thinks he might win one over on these unsuspecting people, that he is better for his ability to see. Yet the village thinks he can’t see much of anything, that he’s the fool. In their social structure he is barely fit to be a peasant.

And finally — and I think this might’ve been Wells’ most prominent message — the story speaks to mental illness and how science chocks it up to a problem stemming from flawed organs that can be fixed simply by removing them. Lobotomies during Wells era were quite common, and their must’ve been some dialogue in regard to their validity. It is clear that Wells was on the side against them, or at least skeptical of them. Might these strange things people see or do, or the deficiencies that they have, be something higher than us, and so we cannot understand them? Or if not, might they at least be channeled in some other way rather than be stomped out? We’ve made progress, sure, but we still approach it as something to remove or control, especially with pills. Of course there are severe cases, but still, this story reaches across time and begs the question of, is there a better way?

To return to the story’s ending, perhaps if we are to see anything in it at all, it would be that Wells is making a comment on life and death itself. Nuñez, in his attempt to flee this reality and escape to another, one more familiar, is killed and crushed and forgotten, to rot away beneath the boulders of the mountain. Here he is beyond science and psychology and all those other human endeavors, and simply lies still as one with nature. Another body amidst the ash-heap of time. That, I suppose, is the only reality we can be sure of; that we will live and die.