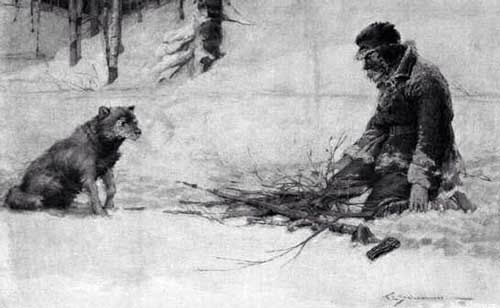 I. “To Build a Fire” by Jack London

This is a tale of a man and his dog hiking through remote parts of the Yukon Arctic during wintertime. But London makes the experience exciting with vivid language and descriptive imagery. He draws the reader into his character’s skin, making the danger realistic and intense. It is amazing what one can do with so simple a setting.

We follow the unnamed man as he makes his way back to town where his friends await him. We keep getting hints from London that the temperature is unusually low and that it is too dangerous for anyone to be traveling in these conditions. Even the dog knows it, wanting to curl up in some crevice and wait for the foul weather to pass. But the man, well, he’s stubborn and determined. He rationalizes the situation, concluding that with a little ingenuity anything is possible.

What the man doesn’t have is common sense, that thing the dog knows as instinct. The wolf-dog’s bloodline contains in it memories passed down from its ancestors. Bite out the frost between your paws before it bites you! Hide down low when the winds are blowing! And so on. His newest lesson is don’t piss off the man, do as he says, lest you’re in for a whipping. This is akin to the man’s reason, for it is a reasonable fear, learned, and it has fixed itself stubbornly in the dog’s personality, and fights against survivalistic instinct.

And though the man does not have so strong a guiding principle as instinct glued to his bones, he does have human ancestry akin to it. This comes in the form of the old timers who tell him not to travel alone in weather such as this. But he fails to listen to this principle, just as the dog fails to listen when his bones are telling him to run off, but the man growls for him to come, and so he does. It almost kills him.

But the dog escapes the man. And the man dies for his inability to build a fire. His fingers freeze together, his body goes numb, he is hopeless. All of this for his stubbornness, his modern mind, his ability to reason beyond instinct. He is doomed for it. London tells us here that there is a middle ground, that rationality is fine, but we must never forsake the past, all the knowledge we can gain for it. The man seeks the town ahead, but he never once considers all the others who’ve done the same and never made it.

Borges is a master of the subconscious, of dreams and hallucinations, of magic. He does not disappoint here. It is the story of a man who dreams up a golem, forms him out of clay with only his mind, and teaches him to live and function through telepathy. We see that the being has become a man when he obeys orders to place a flag on a nearby hillside. The circular ruins that each men live in, I suspect, are the portals that allow this type of thing to occur.

But the first man is distraught. He fears his son (as he calls the golem he’s created) will find out that he is not a real man. He wonders what effect this will have on his morale. He dreams some more, and voices come to him saying that only the fire element know the secrets of these rites, the phantom son can deceive all others but this. But alas, the man himself steps into flames and they do not burn him, they simply dance around his ghostly body. He realizes then that he too is a creation, a puppet pulled by the strings of another mind. It is an astounding, mind-bending story.

The only gripe I have, and it’s not a big one, is that the Borges translators ought to make better use of English cognates more than Latin. I mean Hurley does a wonderful job, and he is certainly true to Borges’ meaning (it is better to use Latinate words for this purpose since the original is in Spanish), but where he fails is in the sense that this doesn’t capture the essence of the story for English speakers, for most it is inaccessible because of the tough language. This style of translation fails the Borgesian philosophy that the original betrays the translation. A translation must be written as if it is an original piece, using modern and popular writing techniques and modes relevant to the target audience and culture in which they’re set.

White writes so that the narrator sits before us, intimate and close, and tells of this story which his own father has related to him. He asserts over and over that his father was a practical and reasonable man, and that this story in the end does not turn out to be a dream or anything of that sort. He says it all happened under the perpetual sun of Lapland’s arctic summer (the exact opposite of where and when London’s story takes place in location and season), and so there is even less reason to doubt its authenticity.

White uses the same grotesque and twisted sense of humor that Roald Dahl employs in “The Man from the South” but does it for opposite effect. He turns the fantastic and terrifying into something highly mundane. The father here is on a holiday in the north when one night he dreams of blood seeping through the keyhole of the door which connects the adjoining suite to his. He wakes up and knows he must look through the keyhole. He finds on the other side a giant blue troll in a nightcap devouring a woman whole.

The next morning he asks the woman at the desk who might be in that room. A doctor she says, and his wife who’s gone missing! The man gets a terrible fright out of this, but he goes out to travel the countryside and get some fresh air. When he returns, he meets the doctor in the dining hall. They exchange glances and words and they realize what each other know. The doctor then transforms into the giant troll, with no apparent notice of the people around him. He comes up to the man of the story and makes a remark that he will be his dinner tonight.

That night the man falls fast asleep despite his terror. But at nearly midnight, he wakes and finds the troll climbing through his window. He turns the other way, continuing to lay there, and grabs his rosary (which he says he uses merely for meditative purposes, never for religion). As the troll is about to grab him, his furry paw brushes the rosary and he explodes, vanishing into thin air. The next morning it is reported that the doctor has been found dead, drowned in the lake.

The laughability of this man is great. He’s a superstitious Christian who won’t believe it, making scientific excuses over and over. And the terror we feel for him is all the more absurd considering the highly comic nature of the events. Yet all the same, if it did indeed happen, as the son insists, well this is quite the tragic mishap. But despite his adamant attempts to convince the reader that all of this is not in the man’s head, one has to remain skeptical. Could he be insane? Or a good story teller trying to pull one over on his children? Might he have been an insomniac? Sleep deprived? Not knowing when he was dreaming and when he was awake? I’d imagine that midnight sun would play dirty tricks on the mind afterall. Or, and we must weigh this too, might it have all truly happened (think Big Fish). The genius in the story is that we will never know.