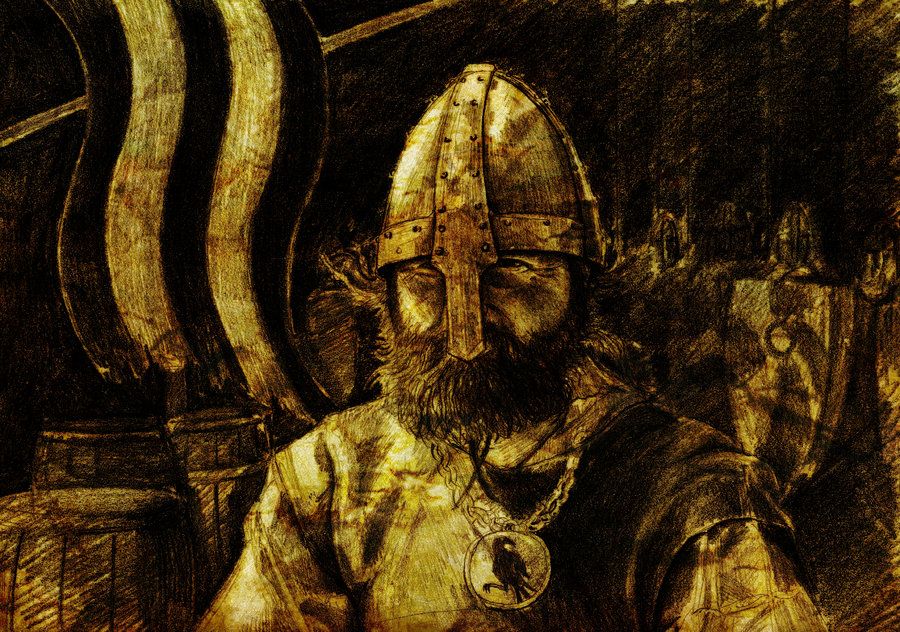 The Boys of Babylon

A rumor once came from the North. There, it was said, strange lands drove out the green of life, the earth turned barren black and the water became hard with frost. Even the beasts–bears and wolves and many others–were told to have turned ivory in the eternal chill. This rumor, as all good stories must, became myth and was a favorite for children to have their mothers tell them at bedtime.

The boys of Babylon were all too familiar with barren ground. The lands surrounding their city, beyond the two rivers of the Fertile Crescent, were no more than a wasteland, covered by grainy sand and the hot heat of the sun. But to think of a golden land like this always as cold as night and black as lead! Impossible! Only in dreams could that exist.

Not to much surprise, when their mothers tucked them away and their heads slowly nodded, they indeed would visit these very lands and fight with their silver scimitars the pale monsters made of pearl. They would grow their beards longs on that journey and return with stockpiles of treasure, carried back by caravans they had hired with their newly found wealth and prestige.

Yet they always woke beardless, just the same as they were before slumber. As the boys grew, these fantasies were rendered impotent by the harsh reality of war, the hardships of trade, and the duties one owes to their family and state. The novelty of the stories dimmed and life went on. There were times of course when they overheard their own wives telling their sons these same tales, but they simply stood in the hall and laughed wistfully.

I of course was one of these boys. Since my youth my beard has grown long on the many journeys I’ve travelled (although these were only in the confines of my emperor’s desired kingdom, and never northwards), I’ve slain many monsters (both beasts and men, though none so fantastic as my dreams would have me believe exist), and I’ve watched many, many men grow wealthy. They did this at home though, in the borders of our own rich lands. To think there are treasures greater than ours abroad is an absurdity!

Still the bars here in Babylon, as they are in most places, are filthy, riddled with whores and thieves and vagabond drunkards. I prefer my evenings spent at home, enjoying home-cooked meals and sparring with my sons. On occasion I’ll stroll through the hanging gardens, or attend a concert at the theatre. It is easy to get caught up with the foolish ways of ruffians I know too well, especially if you lose your sober mind. I have humbled with age to say the least!

Nonetheless one evening, mid-January I’d like to say it was, an old army pal asked me out to the tavern with some of the boys. We went for drinks and drank a bit more than expecting. A few passed out, vomit and drool dripping from their chins, while the others proceeded to take their pick of the women selling themselves there that night.

“No, no. My dick stopped working years ago. Besides I can’t even see straight at the moment.” I said to them.

“Oh, come on. These girls are miracle workers, real sirens, you know. Dick or no dick, eyes or no eyes, they’ll get you just what you need.”

“No, I’ll stay and have another drink. Go. Enjoy yourselves.”

After taking some jabs at my manhood, teasing me with crude remarks, they walked off chuckling boyishly.

The bar began to clear with the depth of the night. More flies fell, more fleas went hopping on the backs of prostitutes. Before long it was only I and a strange looking man sitting there quietly, sipping our brews without word.

Feeling brave, I turned to the foreigner and asked where he was from.

He glanced menacingly towards me. “Nord.” was all he said.

At this point I was too drunk to consider myself and so, despite the character’s booming voice and mountainous frame (sitting he must have been six feet in height), I stood up and gave him a push. “How dare you come to my land, drink my draught, eat up whatever resources you’ve devoured, come into this pub and give me such a dissident look, disrespect me with such an uninterested tone!”

Perhaps what I thought I said was nothing near reality, for the man looked upon me with amusement. Perhaps my speech slurred and my body swayed limp. I don’t know for sure, but the man simply was not moved. He laughed heartily and commanded me to sit back in my seat. Hesitant, but obedient, I complied.

“I’m not from around here,” he said pushing his golden locks from his red face. “I meant no harm.”

His persian was rough but sufficient. Despite his guttural voice, his accent had a nasal quality to it.

“I work for your king at time. Fighting. Persuading enemies. Frightening those who opposes him.” He gave me another menaced look then heartily laughed again.

“No harm taken.” I said stumbling over my words before returning to my drink.

Some time went by when I worked up the courage to speak once more.

“You said you’re from the north? What’s it like? There’s funny stories that go around here, you know.”

“Oh, I know. I’ve heard your stories. They’re all true!” He said with another laugh. I couldn’t tell for the life of me if he was joking or not.

“There are white beasts about if he knows where to find them. It is colder than any nights you’ve ever bore. The lands and skies are often grey. And our women,” (here his laugh went booming again) “our women stink of cheese! I started this one myself, just to keep you scoundrels out!

“What no one talks about for one reason or some other seems to be the snow. What a sight! to not be talked about. How I miss the snow. How I miss my wife, my boy, playing hockey out on the ice and sledding down the hills before the frost sets in too deep.”

What I was hearing was so strange. The man surely was speaking persian, but what he was describing I could not grasp. The image was murky, so difficult to make out. And so I asked, “Snow? What might that be?”

“Ah, yes, snow. It is a manna from heaven. A slow falling rain in many patterns. It is the white gold of the north you may say; for it destroys many men, maddens others, and yet some bear it just fine. I came here for the yellow kind of gold, but I’ve had my fill. I leave now for the truest gold the world has to offer. I’m going home tomorrow. For my family, my lands, my snow.”

Umar was always one to travel to spirit worlds in his imagination, but what we heard when we returned from our escapades that night was crazy. He said he was leaving with some man whose hair was made of gold, whose body was eight feet tall, and whose name was Erik. What nonsense! Giants only exist to men who drink too much. But whatever Umar drank that night stayed with him.

That lunatic bastard sold his wife into slavery the next day. He auctioned his house and all his possessions. He even enlisted his boys into the king’s army, where they’ll probably be sent to their deaths in Afghanistan or Egypt. What a shame. They had such bright futures as businessmen and merchants. Umar himself set off in a caravan with some foul looking ruffians shortly after.

We didn’t see him for three years, but when he returned he had fully cracked. He went around telling everyone how he’d seen stars fall from the heavens as cold ivory flakes, intricately woven with unique designs by some unseen hand. He carried a crystal flask with him filled with water, saying, “see, see, here they are, melted on my journey back by our golden sun into the water of life!” Poor fool lived the rest of his days like this, on the streets, surviving by whatever means pity allowed him.

After awhile he stopped coming around. Who knows where he’s gone off to now. I’d be surprised if he wasn’t dead. I’m not sure if it was a religious experience he had, but if it was, I sure as hell don’t want one. If not, I’m at a loss for words. Either way, one thing’s for sure: I definitely won’t be traveling north.