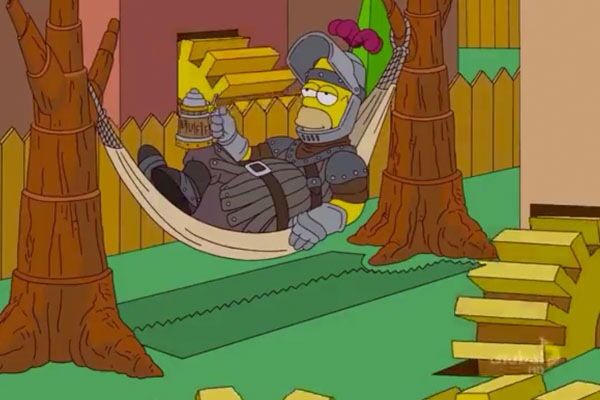 I’ve recently begun to watch the HBO series, Game of Thrones, based on George R. R. Martin’s A Song of Ice and Fire, and I’ve mixed feelings. I’d wanted to read the series for some time after hearing so many glowing recommendations and reviews, but my current list hasn’t allowed it, and so I thought the television show might bridge the gap while giving me greater insight as to whether I’d want to set aside some time for the series in the near future. I am intrigued so far by the portrayal of Martin’s created world. It is believable, it is realistic, it is gritty, and it is filled with emotion. The towns, the atmosphere, the various religions, the relationships between the deeply motivated and well thought characters, along with so many other factors contribute to a rich tapestry that truly builds upon the typical black-white morality and metaphysics of fantasy a new ideology wrought with respect for the world in which we actually live.

What struck me odd though was the British accents employed by the series’ actors. Isn’t this an American author’s work? I simply couldn’t wrap my head around it. I thought a rough western accent might be better suited for the inhabitants of Winterfell, a more pretentious New Englander accent for the imperalistic southerners, and so on. The only compelling language was the one constructed for the Dothraki, something resembling the thoughtful yet brisk speech of the Native American’s.

Slowly I came to realize that they were speaking in British dialect because, well, this was a British world in which they lived. Though Martin did wonders expanding the boundaries of morality and worldview, he did nothing to change the actual world in which most fantasies exist. Westeros is the same medieval world, with nothing more than iron age technology, stuck between the feudal conflicts of Kings and Lords, that has been a staple of the genre from day one. Why this had to be, I’m not sure. Perhaps the situations a world of this type allows are simply too intriguing to let go. Perhaps there is some parallel with this world’s system and the Corporate dominated Capitialism of our time. (I’ve been trying so hard to identify some other parallels between Martin’s time and place and our own. The Dothraki might be the Native Americans whose land was taken by the whitemen, or symbolic of the middle easterners our empire has been trying to subject for so long; The Northerners may be tea-partiers against big imperialistic government; and so on. But I keep coming up short and can see no more than the Dothraki being representative of the Huns of the east, and the feudalism being no more than what it is, and what Martin based it upon, England’s own political system during the War of the Roses.) Or perhaps, and this seems to be the best guess, Martin’s world is not so original afterall.

Most British fantasies, or those that follow the tradition that J. R. R. Tolkien founded with The Lord of the Rings, are built upon the medieval Christian world, and the mythology associated with it (especially Arthurian legend). And that’s fine, and has great potential to be woven into American myth as well (the round table and democracy for a base example). For some time, it seems, we’ve been seeking the Great American Epic, but despite all the acclaim of Martin’s work, I simply can’t believe it will be it. He may indeed become the American Tolkien, but this is no great feat at all in the scheme of things, and certainly doesn’t deem him the American Mythographer, or anything like it. He is an imitator, who draws not upon the world he lives in as much as the tradition he writes within.

And let us remember that Tolkien himself often denied his epic being a work solely about WWII, or the industrialization of his country, or the evil that greed will throw upon man, and he adamantly rejected the notion that it was allegory. And rightly so. As he is cited, he was creating a mythology for Britain, and he claimed his work to be a history (in the manner of Herodotus I suppose) for a country which lacked anything coherent and collected. Yet all these things contributed to that overall myth, and therefore were a necessity in at least the subtext. Besides, Martin’s grittiness reads like another medieval tradition, that of the Icelandic saga (even the White Walkers remind me of the zombies and berserkers that pop up here and there in the sagas and Nordic myths). From what I’ve seen so far his is anything but original, and it certainly doesn’t attempt to bring all the jumbled mythologies of America into one tangible tome. Maybe I’m wrong. As I watch (and eventually read) on, I’ll keep my eyes open for signs that this will grow into something great. But for now, I see it to be nothing more than another body on the bandwagon heralded by recent fantasy giants such as J. K. Rowling and the advertisement potential of the long term series.

So what makes the American Epic? What is it in our mythology that is most important? I’ll identify here a few things that I find to be crucial:

Surely there are others too, but these are the most prominent. And many are already embodied in myths and folklore here and there. There are of course the founding myths dealing with our earliest political giants (George Washington and the Cherry Tree, Ben Franklin and the Electric Key Experiment, Paul Revere’s Ride, and so on), there are the folk figures of Johnny Appleseed, Paul Bunyan and Rip Van Wrinkle, among others, and there are the many tales of the way west, of Louis and Clark, of the rugged men out on the plains, of the 49ers, and of the glorified outlaws, gunslingers and mobsters and gangsters alike. This is exactly what Tolkien saw when he set out to create a unified mythological epic for Britain, many small speckles of folklore scattered about, all with great potential to be part of a central story. This too is surely what Homer or Vergil saw as well, and so they made it their duty, their life’s work, to bring all the chaos into some sort of order.

There have been attempts much more successful and/or authentic than Martin’s. Stephen King’s The Stand comes to mind, a work which details a mass extinction caused by the release of a biological agent from a research facility, the subsequent odyssies of the disaster’s survivors across the U.S., and a final showdown of supernatural good vs. evil forces that ends with a nuclear weapon. His Dark Tower series, from what I’ve heard (this too is on my ever growing list), also seems as though it might be a candidate for the Great American Epic.

I think though that the birth of Hollywood has made film and television the preferred media for our epics. This now, rather than literature, is where most of our mythologies are made public and universal. Cowboys, detectives, pretty little things and their easy eyed suave cigarette smoking men, gangsters and Christmas-time corporate softies all debuted on the silver screen. I think perhaps this may be where our most prominent and enduring epics have been and will be portrayed. Francis Ford Coppola’s The Godfather and George Lucas’ Star Wars are both giants that are sure to endure in this department. The former is only a saga depicting one group’s mythology, yet it deserves credit at least for its scope and accomplishment in goal. The latter however I think nearly does what Tolkien attempted. Lucas brought many of the aspirations and fears, many of the American mythologies and psychologies and theologies together into a seperate locale to be judged and made into a unified whole. It is a noble attempt.

There are others too, Star Trek, Lost, many comic book and video game figures, too many to mention. Of course I cannot say which will be the Great American Epic (and there may be more than one), if it has even been written yet, for only time can decide that. But I highly doubt Martin’s name will be anymore than an honorable mention in a subcategory at the head of which is the other man with two middle R-lettered names.