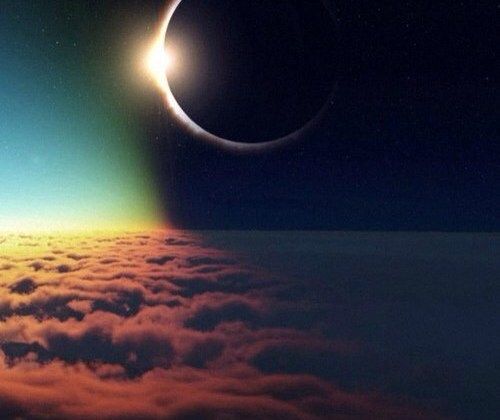 I. “The Eclipse” by James Fenimore Cooper

This one’s from a time when poetry was still defined by true verses and structured forms. Language itself was an artform and it shows in this story. Cooper weaves images and plotlines together with a poetic tongue that towers above the epidemic of bad free verse we have today (broken prose I call it, where line breaks have no function, and content is often lacking). And the story being a memoir too competes nicely with the journal-keeping style of today’s poetry.

The piece is an account of a solar eclipse Cooper witnessed as a boy. But he transforms the experience into a deep study of existence, spirituality, and the interconnectedness of the universe. It begins with a family gathering the night before the eclipse is to take place. Their excitement (and disbelief) is fervent. The whole town in fact is buzzing with anticipation.

We are moved next to the boy lying in bed looking at the stars, contemplating the heavens. Next morning he awakes to a vivid image of the sun sweeping over the mountains and lakes of Otsego, New York at the head of the Susquehanna, and across the plains and forests of the land abreast.

There is then a vignette of a schoolmaster sentenced to the gallows for accidentally beating a girl to death. Though because of his deep remorse, he is pardoned. At the last moment, as the noose is slipped around his neck, a horseman rides up with his letter of life perserved. He now too patiently awaits the coming eclipse.

And then it happens, slowly the moon edges across the sun. Cooper tells us it is indescribable and must be experienced first hand. For all the aetherily associations we have of the heavens, he witnessed the moon’s solidity for a moment, and with it the sun’s and the star’s, until he was then again plunged into the spiritual mind and thought of the creator. It is gone in less than a moment, and the world returns to normal.

It all comes together at this point. This is a story of redemption and rebirth. The reunion of the family, the collective awe of the community, the prisoner’s second chance, the turning world, its nights and days. All of this is wrapped up in the one instant when the world went dark.

A great horror story and psychological thriller. The plot is based around the ancient three-wishes structure, and seems to me to likely be based on something out of 1001 Arabian Nights. Mr. and Mrs. White sit fireside with their son, Herbert and friend Sargeant-Major Morris, of the Indian division of the British Armed Forces. The latter has a monkey’s paw he says he’s received from an old fakir. He says it is supposed to grant its owner three wishes, though for a price, then curses it and throws it into the fire. He leaves and Mr. White hastily pulls it to safety.

As the story goes, he wishes humbly for 200 British pounds, and though he receives it, he does so at the cost of his son’s life. His wife, distraught after the funeral and days of inadequate sleep, forces him to wish Herbert alive again. He does so and later that night a knock comes to their door. Mrs. White works the locks while Mr. White works frantically to make his last wish, for the beast to be dispelled. As this deep tension builds and both are successful in their endeavors, the door swings open, only a gust of wind blowing through the house.

What’s so wonderful about this story is that, though the supernatural is certainly present, it is completely possible (and alluded to often) that it is all coincidence. The 200 pounds is compensation for Herbert’s death, who is critically injured while at work, and both the Whites are upset and deprived of sleep as the final events unfold. The setup is masterful. Not to mention that this is an early example of the modern zombie (a far remove from the miraculous Lazarus and the like). Death is permanent, and the undead are frightening.

“To be or not to be?” is certainly the question in Vonnegut’s now famous short story. But the question is placed in the not so distant future when the cure for aging has finally been found. Population must be maintained at a sustainable number and so for every baby born a volunteer must be found to take its place (or the baby aborted).

This causes a huge dilemma for the young (well, not really) man we meet in the maternity ward waiting room. His wife is having triplets unbeknownst to them up to this point, and so they’ve only found one person, a grandparent, to give up a spot.

A visiting social worker remarks that this is fortunate that at least one child will be allowed to live. The man responds that he’d rather them all live and not force his grandfather to the grave as well. A doctor in the room is quick to defend the system and reprimand the man.

The man is so distraught that he is moved to pull a revolver, shoot both these people, then walk to a telephone booth to dial those infamous digits that make up the title of the story. He schedules an appointment with the Federal Bureau of Termination, therefore making room for all three children and saving his relative the trouble of death. He is thanked for his service by the operator and the story ends.

This is a worthy study of what implications a seemingly perfect world of this nature would bring. There are so many unforeseeable circumstances that may have an overall benefit for the society at large, but may be devastating for individuals. And what of the mundanity of existence prolonged? The consensus in the world seems to be one of despair. But then again, true free will exists here, the ultimate fate now being a choice.

What is most effective about the story is a subplot. In the waiting room a mural is being painted. It details the Garden of Eden, a metaphor for the U. S. at the time. Yet the irony lies in the anguish and ennui so present throughout. This bright, beautiful piece is set in a white-drowned, fluorescent-lighted hospital waiting room where life begins (and ends). The human condition it seems is one in which happiness and beauty is never permanent, not even in paradise.