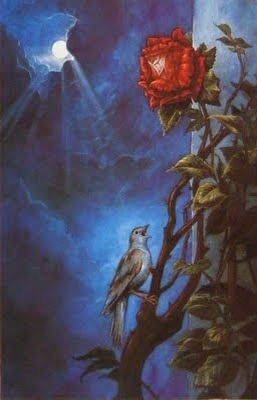 I. “The Nightingale and the Rose” by Oscar Wilde

Our story begins with a young man lamenting that the daughter of a professor will not dance with him, for he cannot provide her with a red rose as none are in season. A nightengale overhears this and, pitying the boy’s despair, she sets out to find what he needs. Along her way she meets many rose trees of different colors, but none that are red. The white rose tree however knows of a way to produce a single red rose. He says that the nightingale must sing him the sweetest song all night long, while pushing her breast into his thorn.

Seeing that this task would be of much more importance than anything she would do otherwise, and seeing that it may at least bring profound happiness to the boy, she completes the task. Next morning the boy comes upon the tree and picks the rose for his would-be love. When she sees his gift however she rejects it, bragging that another man has given her jewels to wear. She remarks that these are of much more value than any flower. The student now angry and disillusioned tosses the rose into a nearby gutter, gives up on pursuits of love, and returns to his study of metaphysics.

The profound and poignant irony this tale exhibits is a wonderful study of philosophy itself not to mention a heavy comment on modern social convention. What a fool the girl is to think that jewels are worth more than this flower! But aside from the obvious, this story reads like a page from an Ovidian fable, that is until Wilde breaks down tradition and brings his critique of modern rationalism and consumerism into it. Not only is the girl too preoccupied with wealth to notice love, but the boy is too concerned with science to be artistic. And with the death of the nightingale who sung her final song, the most beautiful there ever was, and whose product, the red rose, the last bit of her art to remain, was thrown into the gutter, with this so too died love and in fact died art itself. The industrialism, consumerism, and blind rationality of modern man, says Wilde, has killed that higher emotion man must exhibit in order to be human.

II. “The Color Out of Space” by H. P. Lovecraft

There is so much to say about the ingenuity of this work. There is so much accomplished in such a short bit and its legacy endures to this day. This is the quintessential alien story to say the least.

It is the story of a meteorite, or something of unearthly nature, which crashes into a field in rural New England. Samples are taken and no one is quite sure what it is, as most of it has disintegrated and the remaining particles are rapidly decaying. Some locals get sick, some die, some go mad from paranoia, crops die, and yet others remain skeptical, or in disbelief and denial. The at the end, there is a flash of light, and whatever it was that terrorized the villagers, the “Colour” (which we only understand is some sort of vaporous monster from the great beyond), presumably has returned to space (or has it…).

Lovecraft’s style is unique and no one has ever quite matched it. This in particular reads much like a newspaper article and it should, as it is the recorded account taken from a man who lived through the experience himself. Yet unlike a newspaper article it is bogged down with adjectives, though these do well to add to the dark and strange atmosphere of the world. I also commend Lovecraft’s references to old myth and folktale, and his allusion to Irving’s tale of Tom Walker, to reinstate that this is no legend but a true account of something which most certainly did happen.

About halfway through the story I realized that one of the greatest alien movies out there, The Thing (and the novella it was based on), must be based on, or at least influenced by this work. And J. J. Abrahms is also indebted to Lovecraft whether directly or not (see Super 8 and Cloverfield, the definitive alien movies of my generation). In fact his mystery box concept is purely Lovecraftian in nature. I mean Lovecraft starts with a monster, tells of its origins here on Earth, the allows the story to fold back upon itself to remain a mystery as to what the thing was and what else it might do. All of this and not to mention The Twilight Zone, which has stolen at least a few paragraphs from this tale alone!

The merits of this story are innumerable, but they nonetheless reverberate through our popular culture still. And to me, that is enough said.

This story is absolutely terrifying in the most grotesque way possible. It is about a cripple man with dwarfism and other human deformities who is employed by a king as his court jester. The king abuses this jester, derogatorily named Hop-Frog, on a regular basis. Only Trippetta, another dwarf, yet beautiful, will stand up on Hop-Frog’s behalf.

One night Hop-Frog convinces the king that he ought to play a prank on his guests at an upcoming masquerade party. He says he and some other members of the court ought to dress up as orangutans chained together. The men adore the idea and cannot wait to scare the guests at the ball.

The night comes and they make their appearance, terrifying all who attended the party, just as was predicted. But there is a horrid twist. As they approach the center of the room they are attached to another chain and lifted by Trippetta via a pulley system. Hop-Frog then sets them abalze with a torch and escapes through a window in the ceiling with Trippetta. As he leaves he reveals that the costumed men were not beasts at all, but those of the royal court.

There is not much to this story but damn good entertainment and an even better moral lesson which amounts to pretty much the same thing as, “don’t judge a book by its cover.” This is what I admire most about Poe, his mastery of the macabre while still retaining a deep sophistication in his work.